There is something inspiring about a kid’s imagination. 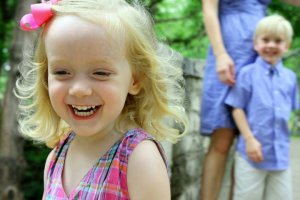 The past couple of years have ushered in the unique experience of being an aunt. Macy and Jackson are their names, and they are truly a delight. Macy, 3, and Jackson, 5, live pretty radical lives. You see, Macy is a genuine princess – England just hasn’t been informed of it. Tiaras and elaborate dresses make up most of her wardrobe, and if it isn’t pink, it isn’t worth any ounce of her attention. Jackson, on the flip side, is a super hero. Be it Batman, Superman or Wolverine, he plays the part in an ever-convincing way.

For me, the scenery looked a bit different. Add a karaoke set, a plastic guitar, and a CD, and you had my dream world. I longed to be a country singer. In fact, I remember all my thoughts revolved around it. Our mini van turned into a tour bus and my mirror into an audience.I was the next best thing, after Reba, of course.

You know, I bet we all have this in common, for every kid imagines being something. From the time we’re old enough to process visual images, we begin wondering what it might be like if only we were…

Lately, I’ve been reflecting A LOT on Psalm 139. If you’re anything like me, you’ve probably skipped over the chapter for the sake of escaping the overly familiar; however, by God’s grace and my desperate need to hear from Him, the verses in it have become life giving to me this week.

“O Lord, you have searched me and you know me. You know when I sit and when I rise; you perceive my thoughts from afar. You discern my going out and my lying down; you are familiar with all my ways. Before a word is on my tongue you know it completely, O Lord…When I was woven together in the depths of the earth, your eyes saw my unformed body.All the days ordained for me were written in your book before one of them came to be”(vs. 1-4 & 15-16).

I find this to be beautiful.

You see, I strongly believe that our Creator didn’t make mistakes when designing us. I believe if He did, He would have gone back and corrected each incorrect mark. Why would an artist want to display anything but His best? He calls us his “workmanship” right? (I also believe that God defines perfection, so a disability, or a mistake in our eyes, isn’t truly one in His, but this is a topic for a later date.) Though I believe it, I get lost in it.

Why did God create me the way He did?What path is He going to lead me down because of it?Will I ever get married? Do I even want to? All the questions can become traps.

His Word says that “[He’s] familiar with all my ways].” It even says that He “perceives my thoughts from afar.” He knows me. Truthfully, He knows me better than I know myself, for before I even had a thought he had thought of me. Before I had a heart, he decided how it was going to be constructed. Before I had a frame, He decided how it ought to look. Now, isn’t that amazing?

When I focus on what He knows, and what He’s always known, it makes my thoughts seem so diminutive, which (perhaps because they are) leads me to one conclusion: I must trust the one who knows me best –my Creator.

My name is Lindsey. I’m 24 years old. I live in Dallas and I have no idea what I want to do for the rest of my life. For a moment, let’s say I did. Let’s say I magically was handed a map of my future, what would I then be trusting in? The map, or the maker of it?

I know his Word is true, so I believe that He’s got me. He knows where I’m going, and He knows exactly why.

“A man’s steps are directed by the Lord. How then can anyone understand his own way? […] Humility and fear of the Lord bring wealth and honor and life.” (Proverbs 20:24 and 22:4).

As I watch Macy and Jackson run around my sister’s house, jumping from one chair to the next, I can’t help but wonder about the future the Lord has in store for them.Is Jackson going to be an engineer or a scientist? What about Macy?Where will she go, and what things will she enjoy?

I’m astonished by the fact that He already knows. All we can do is imagine.

I think sometimes we underestimate the value in parking lots.

In a fast-moving world, with all sorts of outer and inner chaos, there’s something so special about a place where you literally stop. For most of my life, parking lots have merely been a place of oil stains, random liquid deposits, McDonald’s cups, and half-puffed cigs. Tonight, however, as I sat in my car and gazed up at the pharmacy sign on the building in front of me, I realized my true appreciation for the concrete circus. My sister and I had just talked about loneliness (and the ways in which we seek to fill it), community (and what it should look like), and the ways in which the Lord moves in random circumstances (even if it seems as though He’s doing nothing). In that moment, I was thankful for the parking lot.

Several years ago, I was pulling out of a parking space when I saw the woman next to me. Although she appeared normal, by all external measures, what she was doing caught my attention. With her music up and her hands up in the air, she sang the song on her radio as hard as she possibly could. Maybe, she was worshiping. Whatever was going on, it was beautiful. I bet she was thankful for that parking lot.

In college, I lived with three other girls. If someone was blow-drying their hair, we all heard it. If someone had a horrible case of the sniffles, we all fell victim to its repetition. And if someone needed to have a beyond-the-surface-level conversation…they escaped to the parking lot. It was quiet and completely trustworthy. In that lot, I shared with my sister the fears I had in overcoming addiction. Not only that, but I broke up with boys, cried with my mom in the midst of sorrow and confusion, and rejoiced in the union of close friends. There, I examined my Bible, and jotted down my thoughts. I prayed and I reflected. It was wonderful. I was so thankful for the solitude it provided.

A couple of days ago, my friend and I were sitting in my car talking about God’s love for us. We were parked outside of my apartment, but the conversation needed the silence, so we sat there instead.

Tonight, I found something beautiful in a slab of concrete. In the eye of crazy schedules and too-many-things-to-do, the parking lot gave me an excuse. It made me stop. The beauty wasn’t in the clearly defined almost-rectangular designs but was in something else.

Perhaps, was in the permission to rest.

So here’s my ode to parking lots! As crazy and off-the-wall as it may seem, I am grateful for them. Were it not for their purpose in stopping me, I may have bypassed many things.